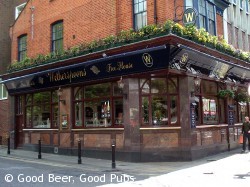 Officially known as the Herbert George Wells the Wetherspoons in Woking is a large busy pub situated in the centre close to the station. I think the building used to be the original Woolworth’s. The centre of Woking suffers from a lack of traditional style pubs, but ironically, you probably get closest to it in here.

The food and drink is much as you’d expect from the Wetherspoon’s chain – generally good quality and very reasonably priced. There are mid-week deals on 2 meals and curry specials on certain nights. However, unlike some other pubs in the chain, there is good selection of real ales including a large choice of guest beers. There is also now an extensive selection of real ciders – 4 or 5 handpumps with more boxes in the fridge.

In recognition of the quality and choice of real ale the Woking Wetherspoons was the local CAMRA group’s ‘Surrey Pub of the Year’ in 2008.

Other Pubs in the Woking Area