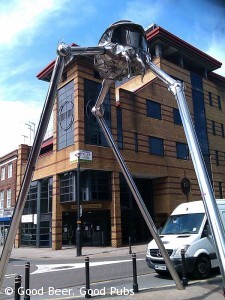 Woking is situated about 30 miles south west of London. However, the current location of Woking is only about 150 years old – the town having grown up around the railway station and the Basingstoke canal. The original area is now known as Old Woking and is a couple of miles to the south and Henry VIII used to have a palace there.

The Woking has a few good pubs although not as many as some towns. Locate the reviewed pubs in the Woking, Horsell, Knaphill and Guildford areas on a map

Woking is served by frequent trains from London, Guildford, Basingstoke and Farnham – all operated by South West Trains.

There is a bus stand by the station but services are mainly local – with services to Knaphill, Horsell and Chobham.

Bridge Barn Lane, Woking, Surrey GU21 6NL
Tel: 01483 763642
Canal-side Beefeater pub (and hotel) about a mile west of Woking town centre. Some parts of the building are obviously fairly old. The location beside the Basingstoke canal is superb and there is a beer garden in front of the pub for days ... Read full review of Bridge Barn

Bampton Way, Goldsworth Park, Woking, Surrey, GU21 3BA
Tel: 01483 228920
The Fox & Flowerpot is situated adjacent to the Waitrose in the Goldsworth Park area of Woking. It's a fairly modern building - built at the same time as all the houses surrounding it. The inside is spacious with a main seating area and a ... Read full review of Fox & Flowerpot

39 St Johns Road, St Johns, Woking GU21 7SA
Tel: 01483 761618
Recently refurbished pub near the canal in St Johns village. The original pub was obviously quite small but it's been extended at some point and there is also a hotel behind the pub now. Food is available at lunch times and ... Read full review of Rowbarge

Guildford Road, Woking GU22 7QQ
Tel: 01483 751426
The Sovereigns is located on the south-western side of Woking town centre - near the Victoria Way railway bridge. It's quite large inside with many different seating areas. There is a small 'garden' area outside too. The atmosphere feels really ... Read full review of Sovereigns

Wych Hill, Hook Heath, Woking, Surrey GU22 0EU
Tel: 01483 889111
** Pub now closed - surrounded by metal fence ** Spacious pub in the Hook Heath area of Woking. The Star Inn has been through some ups and downs in the 10 years since I first knew it. Geographically it's one of the nearest ... Read full review of Star Inn

Chobham Rd, Horsell, Woking, Surrey GU21 4AL
Tel: 01483 773047
Large, freindly Ember Inns pub (and hotel) just north of Woking town centre - opposite the 'recreation common' (think park). Like the other Ember Inns pub in Woking (the Sovereigns), the Wheatsheaf always used to have the reputation of being ... Read full review of Wheatsheaf

Goldsworth Road, Woking, Surrey, GU21 1JT
Tel: 01483 598499
The Woking Railway Athletic Club is easily overlooked as it is situated behind office buildings at the eastern end of Goldsworth Road, hard up against the railway embankment (perhaps not surprisingly). It is a working men's club so you do ... Read full review of Woking Railway Athletic Club

The Pizza Express in Goldsworth Road is good. Noodle Nation in the centre is like a chinese version of Wagamama and serves tasty food for a resonable price.