Newly opened in November 2010, the Euston Tap is situated in one of the two remaining old lodges outside Euston mainline station. 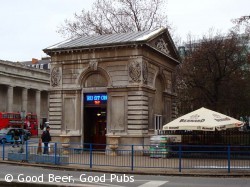 The Euston Tap outside Euston Station

These lodges are all that remain of the original Euston station buildings and they used to stand at the main entrance to the old station. The station and its famous arch were controversially demolished in the early 60s to make way for the horrendous modern station that exists now. (There is a campaign to get the arch rebuilt.)

Given its location inside a very compact square building it’s no suprise to find that the Euston Tap is not a big pub. As you walk in the square bar is situated right in front of you. There are few seats on this level and the standing area surrounds the bar on both sides. Up the steep spiral staircase is another level over the bar with tables and an upholstered sofa that runs around three walls. Not suprisingly the Euston Tap can get crowded at times.

The emphasis at the Euston Tap is on speciality beers – both on draught and in an extensive bottle collection in the fridge. Not all the draught beers are cask, but those that are are served using the ‘Scottish’ air pressure system. Apparently the cellar is beneath the street outside.

Some of the beers are quite strong (eg Thornbridge Alliance at 11% ) and these may be priced by the half on the selection board – so watch out for that if you’re on a budget. But they do carry Bernard Free – a low-alcohol dark beer which is quite tasty. See Non-Alcoholic Options in Pubs – Update 1

Some food is available – definitely pizzas and side orders, but I’ve not eaten here.

Overall the pub is an interesting addition to the real ale scene around Euston – it’s very close to both the Doric Arch and Bree Louise. But for me it has an unfinished feel to it – perhaps it is and it will change over the near future. Given it’s historic setting I’m surprised not to see some pictures of the Euston Arch and the old Euston Station.

Across the other side of the entrance to Euston station there is another lodge and this has now been opened as a sister pub called The Cider Tap – bet you can’t guess what they sell there. I’ve not been to the Cider Tap yet but I’ve heard it’s good.

Other Pubs in the Euston Area