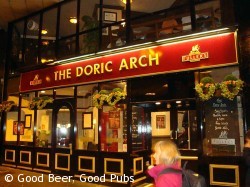 The Doric Arch is situated right outside Euston Station by the bus station. It used to be called the Head of Steam and it was a part of a small chain of station pubs I believe.

The pub itself is cramped and the trip to the toilets can take some planning and needs a security code. But you could forgive the quirkiness because it sold an interesting range of real ales – some that you’d rarely find in London.

However, the pub became a Fuller’s pub recently and initially the vast range of beers disappeared – not surprising since Fuller’s brew their own beers and want you to drink them. However I’m pleased to relate that Fullers seem to have seen the error of their ways and have brough back a good selection of guest ales.

The pub appears to have had a bit of sprucing up recently too and I can recommend the Doric Arch once again. If planning a real trip in the Euston area it now can be considered again along with the Bree Louise and the new in November 2010 Euston Arch.

Other Pubs in the Euston Area