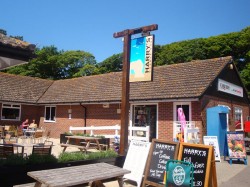 The Durdle Door Holiday Park is situated on the cliffs above Durdle Door and Man O War bays about half a mile west of Lulworth Cove and features static caravans as well as camping areas.

Its reason for being included here is that there is a bar/restaurant called Harry’s Bar which is open from March until October. If you’re staying here or in the area you can pop in to get some good food or have a drink – including some local real ales. Breakfasts are available at weekends – maybe not during the week.

Occasionally they have bands and quizzes too.

Other Pubs in the Lulworth & Durdle Door Area