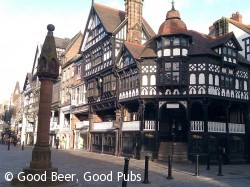 The old centre of Chester

Chester was originally founded as a roman settlement on what is now known as the River Dee – the tidal river that skirts the western and southern sides of the city.

There are still some medieval buildings in the city centre but many of the black and white buildings that Chester is famous for actually date from Victorian times.

The northern side of the city gained a waterway too during the industrial revolution when the Shropshire Union canal was built just outside the northern walls – to join to the River Dee just west of the city. The impressive triple staircase Northgate Lock and the basin by Telford’s Wharf is part of the vertical realignment, and they are certainly worth seeing from an industrial archaeology perspective.

The famous victorian clock in Chester

Chester is quite unusual in the UK in still having its entire city walls intact. In fact it is possible to circuit the city on top of the walls – a great way to get a different view of the city.

Chester Station is on the eastern side of the city and is served by trains from Holyhead and the north Wales coast to the west. The line to Crewe and beyond to Birmingham and London comes in from the south east. There are also services to Wrexham and Liverpool.

Park Street, Chester CH1 1RN
Tel: 01244 340345
Backstreet locals pub right by the city wall and close to the famous Eastgate Street clock. I stumbled across this pub on my walk round the city wall and it looked inviting. It's bigger than you think inside with a smaller room at the front ... Read full review of Albion Inn

Milton Street, Chester. Cheshire CH1 3NF
Tel: 01244 350035
Lively real ale bar in canalside hotel, not far from the station. The building isn't that old and characterful but this bar does have a friendly atmosphere. There are 10 hand pumps on the bar serving a mixture of local beers and guests from ... Read full review of Mill Hotel Real Ale Bar

64 Frodsham Street Chester, Cheshire CH1 3JL
Tel: 01244 327624
Basic locals pub on the north-eastern side of the centre of Chester. I found this pub after a recommendation from a taxi driver, but I'm afraid I cannot recommend this pub to real ale drinkers. There were two hand pumps on selling a ... Read full review of Oddfellows Arms

65-67 Watergate Street, Chester, CH1 2LB
Tel: 01244 324435
Modern two room Marstons pub with a traditional exterior in the western part of the Chester city centre. Entering the pub up the steps the small bar is over on the right hand side – with seating areas at the front of the pub and to the left. ... Read full review of Old Custom House Inn

1 Russell Street, Chester, Cheshire CH3 5AL
Tel: 01244 344525
Popular canalside pub a few hundred yards towards the city centre from the station - look for the Siam Thai restaurant on the canal bridge on City Road and it's underneath. Careful as you go down the steps by the canal though if it's ... Read full review of Old Harkers Arms

Tower Wharf, Raymond Street, Chester, Cheshire CH1 4EZ
Tel: 01244 390090
Large and popular pub on the north west corner of the old city of Chester. Although the pub sits on Raymond Street the actual entrance is down a small passage to the rear. It's only when you get behind the pub you see that that the pub is an ... Read full review of Telford’s Warehouse

Waiting Room at The Queen Hotel

City Road Chester, Cheshire CH1 3AH
Tel: 01244 305000
This large bar is buried within the grand Queen Hotel and opens out onto City Road, just opposite Chester's rather grand station building. The main seating area contains the actual bar and is light and airy. There are smaller, more secluded ... Read full review of Waiting Room at The Queen Hotel

The Holiday Inn Express by the race course is pretty good – and deals are available at times. Don’t rely on the free wi-fi though. This hotel is close enough to the best parts of Chester – including some good pubs.