When I originally created my first pub review site many years ago it featured some pages that weren’t specifically pub orientated. These pages featured places that were worth visiting and other general ramblings on beer and breweries. Some of these pages proved very popular – or so my hit counter told me.

So I’ve started this Articles area to include these pages.

What Happened to the Firkin Pubs?

The first article concerns the demise of the Firkin Brewery in 1999 and the subsequent carving up of the Firkin Pub chain. By Bass (as was) and Punch Taverns. As a ‘frequent flyer’ in the Firkin pubs throughout the 80s and 90s and a big fan of their distinctive beers – especially the superb Dogbolter, this event has bitter memories.

The article contains a bit of history about the formation and expansion of the Firkin pub chain, and the takeover by Bass/Punch Taverns which led to the closing of all the pub breweries. I’ve included some links with relevant information – the ones that are still active.

Visit the What Happened to the Firkin Pubs? article. 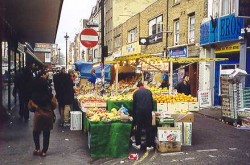 View of the southern end of Berwick Street

Another popular page from my original site was a feature on fascinating Berwick Street and its market in the Soho area of London. I was working in Soho in the late 90s when I first wrote this page and I used to visit Berwick Street almost every day to browse the shops and pick up some lunch and vegetables from the market stalls.

Time inevitably moves on and Berwick Street has sadly not been immune to commercialisation and development. Many of the shops and businesses have disappeared – perhaps for financial reasons? Rather than rewrite the article, I’ve included the page in it’s original form but with annotations to highlight the changes. I’ve also included the page of photos I posted at the time of writing.

Another popular page from the old site – this one talked about London Breweries. At the original time of writing there were only two really – Young’s and Fuller’s. Well of course one of those is no longer in London since Young’s moved from Wandsworth to Bedford.

But something else amazing has happened in the intervening years. The capital now has loads of breweries in around the Greater London area – the article on the old site has been updated many times but I’m still not confident it tells the whole story.

This article will resurface soon too.