A Tale of Two Station Bars

Station bars are changing. Many years ago when I first started commuting in London, Station bars were functional places – impersonal little dives, somewhere to hang out and grab a swift pint before your next train. And for many years nothing changed. The bar on the kentish side of Victoria Station springs to mind here – a regular haunt of mine.

But recently in London (and other cities – eg Newcastle) things have been changing, and for the better. Improvements in quality have made some station bars actual drinking destinations in addition to their role as a waiting room with beer. An example here would include the Hamilton Hall at Liverpool Street station which always seems to be busy. Another recent change is the Beer House on Charing Cross station. Now I don’t visit the Beer House regularly because of the expensive prices and the fact that they don’t serve any real ales – but it is better than the horrid bar that went before. Even the Wellesley on the concourse at Waterloo station has improved over the last couple of years. 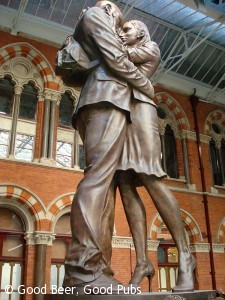 A couple weeks ago I had the opportunity of visiting two station bars on the northern side of the capital in one evening – one three or four years old, and one that only opened earlier this year. It was interesting to compare and contrast the styles, and I think maybe I’ve found a new favourite pub in London.

So, here’s a report of the two of them.

The Betjeman Arms nestles in the shadow of the enormous bronze statue of the lovers at St Pancras International station. The Betjeman Arms opened when the restored station finally reopened as St Pancras International in 2007. It’s at the eastern end of the main southern wall of the old gothic concourse building, and it looks out onto the main Eurostar platforms serving Paris and Brussels. 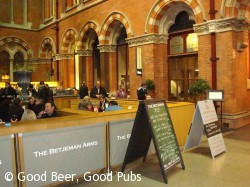 Considering the size of the station, the pub itself is not that large. There is a new seating area with its own bar out on the actual concourse – but who wants that on a cold November evening. Once through the main door of the pub there is a seating area to the right with the kitchen area to the left. The bar is straight ahead, with another entrance over to the right. There is a further room over to the left but that is for diners only and I’ve not been in there since I’ve never eaten at the Betjeman Arms. The bar gets really busy – especially at rush-hour times – and seating is scarce. 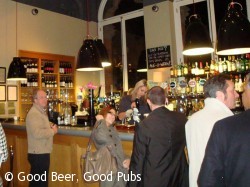 The bar at The Betjeman Arms, St Pancras Station

On the bar there are four handpumps serving a selection of real ales. The Betjeman Arms is currently operated by Geronimo – an offshoot of Young’s pub company. Whilst there was a pump for Young’s Ordinary, the other beers were from a variety of independent breweries including Purity and Adnams. There is also a house beer, but actually it’s Sharp’s Cornish Coaster rebadged. The beer selection was increased on the day I was there as they were having a small beer festival on the concourse terrace outside. But without seats inside the pub on what was a cold evening we didn’t spend much time here – that and the fact that the beer quality was nothing special.

So while the Betjeman Arms is in a fantastic location and promises a lot, it’s actually a pub that I seldom visit – especially now I found the other station pub in the area… 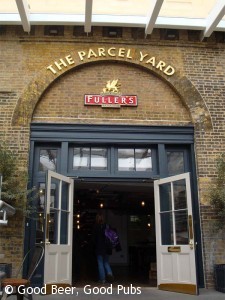 Just across York Way from the Betjeman Arms is the Western side entrance to King’s Cross station. This leads into the newly refurbished and re-located concourse of King’s Cross. It’s an excellent change to the station which always used to suffer from a very cramped concourse facing out onto Euston Road.

I first found The Parcel Yard by accident when arriving early at King’s Cross for a train to Edinburgh in July. And what a discovery… It’s a Fuller’s pub and only opened early in 2012. The Parcel Yard can be a bit tricky to find the first time. You can get to it via a staircase at the northern end of this new concourse – just beyond Harry Potter’s famous platform 9 3/4.

It looks so unremarkable from the outside but this enormous pub is housed within the original parcel office buildings situated between the main line and local lines stations. It’s easy to see that a lot of money has been spent on it. 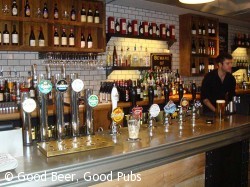 The Bar at The Parcel Yard, Kings Cross

Once up the steps and through the door you’re faced with a long corridor at the end of which is the lower of the two massive bars. The 12 handpumps on this lower bar serve whatever the current range of Fuller’s beers consists of plus a number of guests. Every pint I’ve had in here has tasted top-notch – especially the Wild River which was available throughout the summer into the autumn.

On this level there are three distinct seating areas – small cosy rooms that you just walk past to get to the bar, a light central atrium area and some quieter larger seating areas that overlook the main line platforms. These latter areas are sometimes booked for private parties. 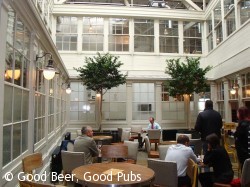 The atrium area at The Parcel Yard, Kings Cross

Going up another staircase from the main entrance takes you to the equally large upper seating area and another bar. Although you can just drink up here you know this is definitely designed as dining territory. The bar up here only has eight hand pumps – and so does not have the full selection from downstairs.

Throughout the entire pub, there is an amazing collection of railway related bric-a-brac – and the wooden surfaces all feel as though they could be the originals. In the toilets they even seem to have original Thomas Crapper toilets with the push down flush handle. 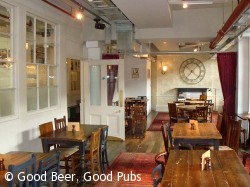 One of the seating areas at The Parcel Yard, Kings Cross

I’ve not actually eaten in the Parcel Yard but the food looks very good and in the evenings there are many people eating – especially on the upper level.

You can probably tell that The Parcel Yard is by far my favourite of these two station bars – in fact I’ve been a frequent visitor since the summer as the rocksolid Wi-Fi in the wide open space in the afternoon make it a pleasant place to work from.

Next week should be trying out the brand-new Beer House at Waterloo station that apparently does feature real ales. Hopefully I’ll be at a tell you about that soon.

One Response to “A Tale of Two Station Bars”