You are here: Good Beer, Good Pubs > Blog > Pubs > London > So Farewell to the Cove Bar in Covent Garden

So Farewell to the Cove Bar in Covent Garden

Was wandering across Covent Garden Piazza on Friday last week and I made a sad discovery – the Cove Bar is no more.

Apparently the lease had run out, and the pasty shop and the Cove above have both closed. I believe this happened right at the start of 2011 and on Friday I could see that all fittings from the pasty shop have gone – it’s just an empty shell. 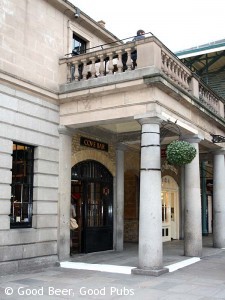 Cove Bar, Covent Garden – the entrance beside the pasty shop

A favourite of many people – including myself – the Cove was an amazing place – a Cornish themed bar in the heart of London. On the face of it that doesn’t sound too exciting but it was one of the only pubs in London to sell Skinners beers. The three Skinners beers were usually Ice Blonde, Betty Stoggs and my favourite – Cornish Knocker. The Cove also regularly carried St Austell Tribute and latterly Proper Job. All the beers were well kept.

Given its location the Cove was one of the West End’s best kept secrets. You had to know to find the door beside the West Cornwall Pasty shop in the main Covent Garden market building and have the confidence just to walk in and up the stairs – and there it was, complete with a pretend Cornish fishing boat for a bar. Cove Bar was picked out in letters above the door – but so far above eye line that hardly anyone saw that. There was a small brass plate screwed to the wooden stairs that stated “Real ale served here” or something like that. And that was all the signage there was.

Enough people did know about it though to make it pretty busy at times, but you could usually find some space – even on the balcony which overlooked the entertainment on the Piazza. You were of course very close to the drinkers on the balcony of the dire Punch & Judy opposite but we all knew which pub we preferred.

I first encountered the Cove in the early noughties when I stumbled across it by accident while checking out the pasty shop. It quickly became a regular West End haunt of mine, and everyone I took there really liked it. In the early days it was actually run by Cornish people – including staff from the Old Inn, Mullion.

One off-putting aspect of the Cove was the prices. Even given it’s location it was extremely expensive and I read from the latest reviews that they were charging over £4 per pint.

But despite that it’s shame it’s closed and although I hadn’t visited for a while I’m not sure where my next pint of Cornish Knocker is going to come from.

Photos of the Cove Bar

I never really took many pictures of the inside of the Cove – it was on my list…  But here are some pics – mainly from my dodgy mobile phone.

Cove Bar, Covent Garden – The sign over the door

Cove Bar, Covent Garden – The balcony was a great place to watch the street entertainers on the Piazza

Other Pages Featuring the Cove