Not a massive amount of post-Christmas action on the beer price reductions at Morrisons this month – but a superb offer if you’re interested in non-alcoholic beers.

Research done once again at the Woking store.

As well as the regulars: Lees – Brewers Dark and Wyre Piddle – Piddle in the Hole both at £1.00 for the 500ml bottle there was also a label for Marstons Ashes. This was also priced at £1.00 but there were no bottles left on the shelf. 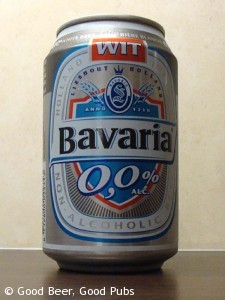 Despite the Bavaria name this beer is actually made in Holland and this price reduction holds until 23rd January according to the shelf label.

Next post: So Farewell to the Cove Bar in Covent Garden