Near where I live, the best options appear to be in Morrisons supermarket – handy in that it’s the closest. Sainsbury’s on my first visit had nothing but it seems that the situation is improving – with at least two options available at the moment. There is no Tesco near where I live at the moment (and no thanks Tesco – we don’t need one) so I haven’t done any research there, but I do hear that they stock Bernard Free which I recently enjoyed at the Euston Tap in London.

Becks Blue
The most common option in pubs is also available here in 6 bottle cartons. I commented on the excellent flavour in both of the previous posts.
Bavaria 0.0
Another good one with a real beery taste and no odd flavour. Available in bottles or cans. This one is made in Holland despite its name.
Bavaria 0.0 Wit
An excellent alcohol free wheat beer. Available in Morrisons in cans.
Cobra Zero
This alcohol free beer is produced alongside the normal alcoholic Indian-style Cobra. The similarity between the two versions is striking and I have enjoyed this beer on it’s own as well as with a spicy meal. Currently my favourite of the alcohol free beers although the one time I had 3 bottles in one evening I did experience a hangover-style headache the following day. So who knows what’s in it – it certainly isn’t like the other more european flavoured ones.
Kaliber
Haven’t tried this one yet. I suppose I should but everyone seems to slag it off. Available in cans.

Obviously prices in supermarkets change over time so this snapshot of prices from Woking Morrisons on 28th November 2010 is really just a guide.

Both these local small shops had just Becks Blue – significantly more expensive than the majors.

I have just ordered and received a couple of mixed cases from the Alcohol Free Shop – a site I stumbled across when searching for details of the other beers I’ve mentioned. They carry an extensive selection of alcohol free and low alcohol drinks of all sorts and the prices are not bad if you order a quantity. I chose two mixed cases of beer as they have an extensive selection including many I’d never seen before.

I’ve just started working through them and I’ll post on my experience soon. 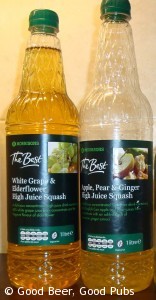 Veering completely away from beer I have also been experimenting with other drinks. Previously I’ve never been a fan of squashes – I guess I’ve always felt they were for children. But my wife used her initiative and raided the supermarket shelves for something a bit different.

Once again Morrisons have the better selection and my two favourites are now the ‘White Grape & Elderflower’ and ‘Apple, Pear & Ginger’ – both from their ‘The Best…’ range. Sainsbury’s carry a ‘Rhubarb and Ginger’ in their ‘Tast the difference ‘ range which is not bad either. Combine any of these with some cheap sparkling water and you have a tasty pint that’s not pretending to be something else. I sometimes spice these up a bit more with some Wrights Original Dark Ginger – a strong ginger cordial I picked up at Ripley Farmers Market.

If you’ve got any other ideas for good alcohol free beverages for someone who like a beer then I’d be glad to hear them. Why not leave a comment below.

8 Responses to “Non-Alcoholic Options in Supermarkets”