Once again a small selection of good deals in the bottled beer department at Morrison’s this month – as researched at the Morrisons in Woking. 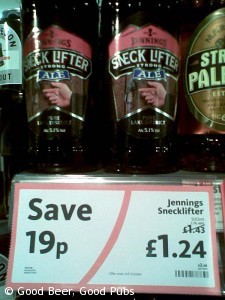 The Lees ‘Brewers Dark’ is still £1 a bottle as expected and the Wyre Piddle ‘Piddle in the Hole’ has dramatically reappeared – also priced at £1. Though that one had disappeared.

Other beers on discount were:

An interesting note on the prices… The Holts at £1.19 is badged up as 50p off implying the full price is £1.69. This does seem to be the price of most of the bottles in the Woking Morrisons. However, the Jennings Snecklifter is marked as 19p off, the full price is £1.43 – that’s an unusual price for bottles of beer.

Will try and update you a little earlier next month.

Filed in: Beers, Bottles, Off Licences/Shops | Tags: Morrisons | No Comments