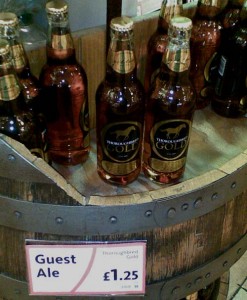 Back to the Woking store for this month’s update. (I’m pleased to see that the Morrison’s offers are generally widespread since my last month’s Wokingham, Berkshire updates were mainly confirmed during a trip to the Morrisons in Plymstock, Devon).

Once again though, the good deals seem very limited with just the Lees Brewers Dark at £1 a bottle. This definitely seems to have supplanted the Wyre Piddle Piddle in the Hole that was £1 for ages but is now nowhere to be seen. I’m told by the assistant at Morrison’s that this discount on Brewers Dark is to continue for the forseeable future.

The only two other beers that were reduced were Thwaites Thoroughbred at £1.25 and Holts Humdinger at £1.29.

Filed in: Beers, Off Licences/Shops | Tags: Morrisons | No Comments