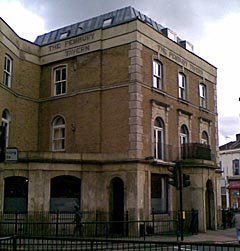 Hackney in north-east London isn’t my normal stomping ground, but I was recently in that area for a business meeting and stumbled upon the Pembury Tavern.

The Pembury Tavern is close to Hackney Downs railway station on a busy crossroads. My visit coincided with the start of the rush hour, and the traffic outside was getting nowhere fast.

The outside of the pub is impressive but looks grey on a grey winter’s day. But the inside is open and welcoming despite being sparsely decorated.

There are 16 handpumps on the bar – mostly serving beer from the Milton Brewery. Apparently they are located on the outskirts of Cambridge but I must admit I’d never heard of them before. As well as the Milton beers there were a couple from the Milestone Brewery and one or two others, as well as at least one real cider.

On my visit I had two pints. Firstly the Milton Sparta – a hoppy beer in the Hophead spectrum, but nowhere near as lively.

The second pint was Milton Nero – a dark and complex stout. It tasted thick and oaty with some significant sweetness. I don’t think I could drink much than a pint of that one. 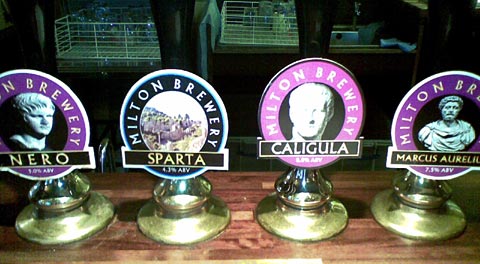 Pump Clips at The Pembury Tavern

Other attractions in the pub include a pool table and a bar-billiards table. One end of the pub seems to be like an office – many people using their laptops. There is a wi-fi hotspot which I believe is free.

My visit was relatively brief, but it’s enough to convince me I should come back for longer. With the trains into Liverpool Street so close and frequent it’s certainly easy to get to. 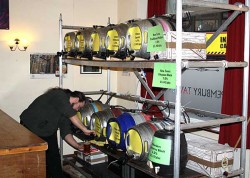 Beer Festival at the Pembury Tavern

Since I first drafted this post a couple of weeks ago I have been back to the Pembury Tavern again on March 10th – once again for a brief visit. There is currently a beer festival on – with a rack of casks set up opposite the bar. I think there were another 8 beers on with a couple of real ciders too. I tried the Skinners Spriggan which was very good.

I think the beer festival runs until Sunday 14th March.

Next post: Is Harvey’s Best The New Young’s Ordinary?