This is the third post in a series featuring a pub crawl that Jon and I undertook recently around Lewes in East Sussex. It features the last couple of pubs we visited – the Lewes Arms and the Brewers Arms. You can visit the previous two posts:

The Volunteer and the Elephant & Castle

Back across the river bridge and then to the right we came to the Volunteer on Eastgate Street.

It’s an attractive welcoming pub, but was selling just Sharp’s Doom Bar and St Austell Tribute. These are both fine beers but we decided we hadn’t come to Lewes to drink cornish beers so we decided to press on.

Next potential stop was the Elephant & Castle up the hill on White Hill. We decided that this pub didn’t look that inviting and as time we short we passed on that one too.

Retracing our steps slightly and then up a side street we came to the Lewes Arms.

The Lewes Arms in Mount Place has some notoriety in that it was the setting for an extraordinary boycott some years ago by the regulars. At the time the pub was a Greene King pub and like every pub in Lewes it stocked Harvey’s Best. GK went through a stage a while ago of purging their pubs of all but their own beers and the Lewes Arms was no exception. 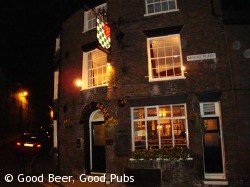 Only here the locals didn’t take too kindly to it and organised a campaign to get GK to change their minds. When Greene King wouldn’t, the boycott was born. All the regulars stayed away and the pub was apparently deserted most nights. I believe Greene King tried all kinds of tricks to convince people that the boycott wasn’t really working – including bussing staff in for quizzes etc from towns nearby.

Eventually though GK threw in the towel and began stocking Harvey’s Best again. After a while GK sold the pub to Fuller’s and now the Harvey’s Best rubs shoulders with London Pride and the other Chiswick-brewed regulars.

In retrospect Greene King argument that Harvey’s pubs tended to stock only Harvey’s beers and that they were only doing the same was a fair one. It is interesting now that the Royal Oak in Borough which is Harvey’s only London pub always carries one beer from the Fuller’s range – usually (but not always) the seasonal guest. It is rumoured that this is a reciprocal arragement for the Lewes Arms carrying Harvey’s Best but that was denied recently by the landlord of the Royal Oak. Incidentally the Fuller’s pints in the Royal Oak are always on top form.

In another recent move many GK pubs now regularly carry guest beers from other breweries – most notably in my experience the Fulflood Arms and the Green Man in Winchester which seem to stock hardly any GK beers. Perhaps GK learned from the Lewes Arms experience – perhaps the two occurences are unrelated.

Anyway I hear you cry, what is the Lewes Arms really like?

This was my first trip to the Lewes Arms and I really had no idea what to expect. It’s located on a small backstreet and is quite a tiny pub inside. It reminded Jon and I of the Charles Lamb near Angel tube station in London – a larger room with small areas off.

The pub seems friendly and we weren’t treated like outsiders at all. The barstaff were chatty and the atmosphere overall was very good. 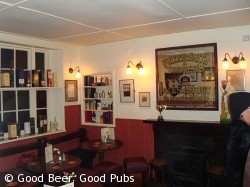 Inside the Lewes Arms, Lewes

Beer-wise the selection reflects the Fuller’s ownership plus of course the Harvey’s Best’ Disappointingly the Gales HSB (one of my favourites) was lack-lustre and I thought the Red Fox to be not much good either. Ironically the best pint here was the Harvey’s Best but that wasn’t superb either.

It was a shame that such a nice pub should be let down by the beer quality.

After some hasty but tasty chips in the street from the chippy opposite the Lewes Arms, Jon and I headed off for our last pub of the evening – the Brewers Arms.

The Brewers Arms in High Street, close to Lewes Castle, is quite large when you get inside and has two distinct halves – a subdued dimly lit front bar and a lively bright back bar.

We had no stranger-phobia that you get in some places and the barstaff were very friendly and efficient. They even let me take away a Harvey’s glass for a contribution to their charity box so I’ll always be well disposed to the pub.

The Brewers Arms is advertised as a true free-house and the selection was quite eclectic. I tried a Hammerpot brewery beer (forget which one – oops) which was OK but the Harvey’s Best was very, very good. And so that beer bookended our trip to Lewes. All that was left was our synchronised dash to the station to pick up the train back to London.

Our evening in Lewes was great fun despite the rather gloomy October weather. The pubs on a map don’t seem very concentrated but Lewes is quite a small town and it doesn’t take long to get between them. Lewes itself looks interesting and is worth a visit for more than just the beer.