Recently, Jon and I took an evening trip to Lewes for a bit of a crawl round the pubs. We’d been to Brighton for the evening many times before and wanted a change so Lewes was selected – partly because of our love of Harvey’s beers. A quick glance at our Southern Railway timetables showed that although the trains from London to Lewes were not as frequent as to Brighton, they were still just as quick.

I’d been to Lewes before but never drunk there – not even on bonfire night which they take very seriously in Lewes. The town itself is a really attractive traditional old town – well worth a visit for things other than pubs.

There is evidence of the presence of the Harvey’s brewery all over the town. It starts when you get off the train and see the small distribution warehouse across the station car park.

From here I walked up a curving path that used to be, or used to run next to the southern end of the railway line that once linked Lewes with Uckfield and Tunbridge Wells. Looking back towards the station just a bit after the Harvey’s distribution warehouse there is what looks like a tunnel mouth. I’m not familiar enough with the original path of the railway or its history in Lewes, but was the warehouse directly linked to the railway here? Some historical research needed when time permits.

The Harvey’s Brewery (from the outside) 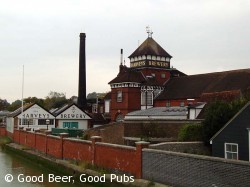 The path of the railway gets lost as you approach the High Street but I soon found myself at the bridge over the River Ouse. Diagonally opposite you can see the classic tower structure of the brewery itself – the view seen in many photos obviously taken from the bridge, including the one shown here.

As I wandered down into the brewery yard I was immediately struck by how small the brewery was – no bigger than a small town church really. Given the growing popularity of Harvey’s beers these days I wondered immediately how they managed to cope. I thought immediately of other small scale breweries that were forced to move by the capacity restrictions of their original premises – eg Dark Star and Hop Back. But fortunately for now the brewery shows no sign of having to move.

I had not booked onto a visit so I didn’t stay for long. I made a mental note to return to look tround the brewery one day – although I gather the waiting list is substantial. I quickly popped into the brewery shop round the corner in Cliffe High Street. Apart from the expected merchandising for sale, the shop appeared to be surprisingly full of bottles of wine rather than beer. Takeaway containers are available here and presumably the draught beer is served straight from the adjacent brewery.

But I didn’t take advantage of that as it was straight on to the first of the pubs on the list – pausing only to explore the pumpkins outside Bill’s cafe on the High Street.

The next post in the series covers the first few pubs we visited in Lewes. A third post covers the last couple.