Recently Jon and Richard and I made a return visit to Salisbury for a Saturday afternoon pub crawl. This post covers the first part of the day when we got to the following Salisbury pubs: The Village, The New Inn and The Market Inn. It also mentions the Rai D’Or and the Frothblowers Arms which we didn’t get to. 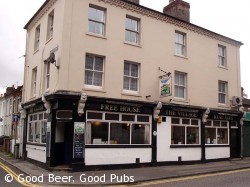 Having got off the train we headed first to the Village on Wilton Road, just north of the station.

Frankly, the Village is a bit scruffy but you go there for the beer rather than the plush furnishings. Perhaps just like a village it’s the people that are important. The locals obviously all feel at home and for strangers the atmosphere is welcoming.

If you’re a railway enthusiast you should definitely come to the Village as the pub is crammed with photos of trains and other railwayana.

On this visit I was drinking the Quadhop from the Downton Brewery – a beautifully tangy, hoppy pint.

The Village would be a good start to any pub crawl. 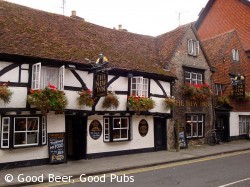 From the Village we strode along Fisherton Street into the centre of the city and chose the New Inn as our next destination.

The New Inn in New Street was by far the busiest pub we visited in Salisbury that day – they must be doing something right. We did get a seat eventually in one of the many rooms.

The New Inn is a Hall & Woodhouse pub and I was pleased to see that the Lemony Cricket was still available. This pint has a definite hint of citrus but not too much (like the Grapefruit beer at the Jerusalem Tavern in Farringdon). 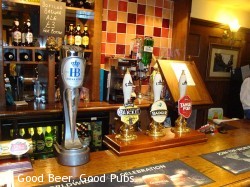 The bar at the New Inn, Salisbury

We grabbed some lunch here like most people were doing. The food was good and reasonably priced.

This pub used to be Salisbury’s non-smoking pub before the ban came in – not of course a unique selling point any more. There’s a large garden out the back with a view of the cathedral which is great for sunny days – not a gloomy October afternoon.

We tore ourselves away from this excellent pub after a couple of pints as we had a lot to get through.

The Rai D’Or in Brown Street looked good from reviews on Beer In The Evening but unfortunately does not open until 5pm on Saturdays. So we won’t be going there then.

Jon and I visited the Frothblowers in 2008 and we were looking forward to reacquainting ourselves with this small cosy pub. but this one was shut as well – despite the advertised opening hours on the door. 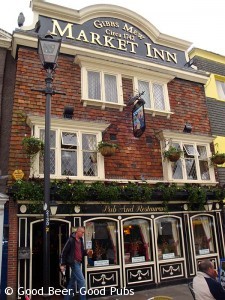 The Market Inn is situated perhaps not surprisingly on the market square and is a pub that is more inviting than it initially looked. I’d certainly come here again.

There were 3 beers on: Ringwood Best, Sharps Doom Bar and Box Steam Golden Bolt. The last one was a tasty golden beer – very moreish.

Bizarrely food is only available from 3pm on Saturdays.

Read a write-up of the second part of our trip including the Wyndham, Deacons and a return to the Village.