I recently revisited the Harp in Covent Garden, London after a break of a couple of months and unbelievably the pub has got even better. I’m told this is due to the fact that the landlady has bought the pub outright from Punch and now has complete control over how it’s run and what beers to stock.

I was a late convert to the Harp some 2 – 3 years ago but now when in the rea it’s a must visit pub. It used to be one of the smokiest pubs in London, but that’s all changed now and the atmosphere is just people enjoying themselves. 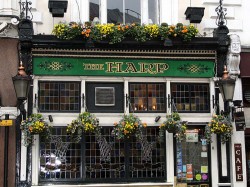 The pub is extremely narrow inside and when it’s busy (seemingly all of the time) it can be a struggle to get past the bar to the slightly larger open area at the back. There is a quieter room up the narrow stairs if you need a bit of peace and quiet. Be aware though, the stairs are almost as precarious as those at the Seven Stars in Chancery Lane.

The beer selection will never disappoint as there are 8 different beers on at any one time. The selection varies constantly apart from the two staples and on my last visit the list comprised:

If you’re hungry there are various sausages in a roll to eat assuming there are any left – they’re very popular. These are cooked for you behind the bar.

One Response to “The Harp Bar, Covent Garden”