St James’s Park Crawl – The Others

I’ve already posted about the excellent Speaker near St James’s Park tube station. But it wasn’t the only pub we visited that night… 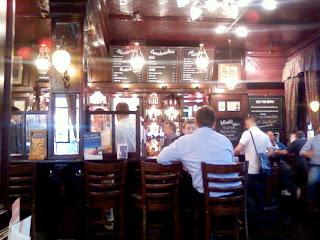 We were meeting at the Adam & Eve which is a T & J Bernard pub right by St James’s Park tube station.

The pub has a broad mix of customers – although the suits do tend to predominate at 5:30 on a Wednesday evening. I’m guessing that the Adam & Eve is a popular after work establishment given the brisk turnover of customers.

The large windows let in a lot of light but the pub interior still seems dark, because of all the dark wooden features.

Beers available were: Adnams Bitter, Well’s Bombardier, Fuller’s London Pride and Young’s Bitter. I tried the Bombardier which was OK but tasted a little tired. Perhaps because of the disappointing pint we moved straight on to the next one when Jon arrived.

From the outside the Old Monk Exchange is just a doorway in Victoria street. You descend the stairs and it opens out into a cavernous basement bar. It initially looks like a Nicholson’s pub, but actually may be Greene King given the beer selection – GK Abbot and IPA, plus Twickenham Ales Summer Gold.

Not being particular fans of GK we both opted for the Summer Gold which was light and tasty, but not we considered as good as their Naked Ladies. Still it was 10 times better than my first pint of the evening.

Tempted to eat here but decided to press on to the next one which was the Speaker in Great Peter Street. I’ve already commented on this pub so won’t repeat myself in this post. 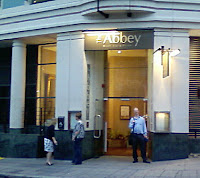 The other pub we visited was the Abbey in Abbey Orchard Street. It’s another pub that’s all in the basement with just a door and porch at street level.
It’s a noisy pub – lot’s of plain walls and no carpets. Some people may find a conversation a bit tricky.

The Abbey is a Martson’s pub although you may not guess it immediately. Beer-wise, tonight it offers Brakspear’s Bitter, Marston’s Long Hop and Jennings Cumberland. There is no Pedigree, no Banks’s.

After a couple of tastings of the others I had a pint of the Brakspear’s but it was a bit disappointing. It was also quite frothy and I noticed that it had been served with a tight sparkler. As an experiment I asked for another half of Brakspear’s with the sparkler taken off. The difference was amazing – a delicious beer with almost no head. This was much more how I imagined Brakspear’s should taste. Once again the importance of the sparkler had manifested itself. See my previous post on Brains Dark where the opposite was true.

Some may like the Abbey but I doubt I’d return, especially with a pub as good as the Speaker just down the road.