An Evening in Winchester (Part 2)

This post follows on from the previous part of my write-up of our recent evening in Winchester. 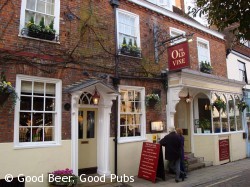 Having met my friend at the station we headed straight over to the Old Vine in Great Minster Street opposite the cathedral.

I occasionally used to visit the Old Vine when I lived in Winchester 20 years ago and it was very popular. But it got a lot less attractive over the years – descending into an awful chain pub format.

I was alerted that things had changed for the better at the Old Vine through the reviews on Beer in the Evening and I returned earlier in the year to investigate.

The interior of the Old Vine has been extensively refurbished and the pub is now split into two halves – a restaurant side and a pub side. 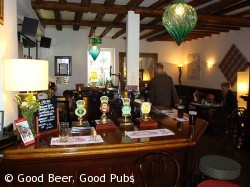 The restaurant seems very busy but I’ve not actually eaten here – I’ve just focussed on the pub side which was also very busy on our Wednesday evening trip.

The Timothy Taylor Landlord seems to be a permanent fixture, but on this occasion I had the Summer Ale from the Hog’s Back Brewery) – quite a dark and malty beer for a summer drink but tasty nevertheless.

We had a few more pubs to do so didn’t stay for more than one.

The Green Man on Southgate Street is another pub that has resurrected itself after some time in the wilderness. Even the barman at the Hyde Tavern couldn’t believe it was actually worth going to these days. But it’s definitely worth the short walk away from the centre.

The interior is very atractive with wood everywhere and a beautiful green tiled fireplace in the side wall. There’s even a skittle alley out the back but I’ve never tried it.

The Green man is a Greene King pub but you wouldn’t believe that from the usual selection of real ales. On my previous trip in March I think GK IPA on gravity was the only GK beer available.

Well Geoff and I had a shock waiting for us as the pub was closed – due to electrical problems – or so the sign said. That was a real shame as I could see that one of the handpumps was for Bowman’s Swift One – one of my favourite beers.

Thwarted, we had to head down the hill to the Wykeham Arms – one of the more famous and historic pubs in Winchester.

Read about the pubs we got to:

And the ones we didn’t get to: