Aldgate Lunchtime Options No2 – The Dispensary

Number 2 in an occasional series of pubs I can visit at lunchtime. It follows on from my first ever post which concerned the Pride of Spitalfields. 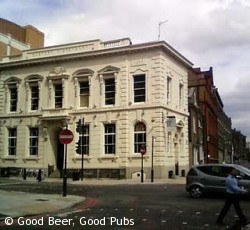 The Dispensary is situated on the junction of Leman Street and Alie Street – just down the road from Aldgate East tube station. There used to be 3 pubs on this crossroads a few years ago. The Old Monk has now become a ‘gentlemans club’ and the Black Horse which reinvented itself as Bar Bed recently became a crime scene.

The Dispensary itself is enjoying a bit of a resurgence after having reopened some months ago. Prior to that it was closed for ages after a drastic decline in quality. It originally opened in 1998.

On the beer front, the Dispensary is now the local CAMRA group’s Pub of the Year, so you’d expect something special. I started with Hog’s Back HBB – refreshing and tasty, but I preferred the Nethergate Umbel which is a fruity, floral beer but slightly bitter. I know not everyone likes beer like this, but I do. 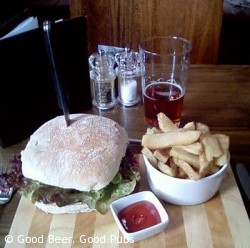 Lunch at the Dispensary, Aldgate

If you’re eating here and ordering from the menu make sure your bank balance is healthy. I chose the steak burger – almost the cheapest item on the main course menu at £9.50. But it was superb – cooked slightly rare, how I like it. And I was cetainly full up when I finished it.

The Dispensary is very much geared up like a restaurant at lunchtimes – you’re shown to a table and the order is taken from the table.

I was going to say that I’d be unlikely to eat there again given the prices but during a conversation with Annie who runs the pub she told me that they do offer Beer and Baguette lunches for £5, and Beer and Ploughmans for £9.50. I’ll certainly be back to try those.

I did pop back today for an excellent pint of Harvey’s Best which they usually stock. Dark Star Hophead is another regular apparently.

And you can read a more recent review of the Dispensary here.