Are Gale’s Beers Disappearing from the Capital? 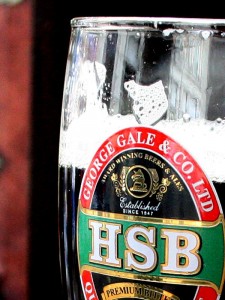 Why is it getting harder to find Gale’s HSB in London?

25 years ago when drinking in Fuller’s pubs in London I’d have been pleased to discover a pump with Chiswick, London Pride and ESB pumps at the bar. It was something special to find a pub that sold both Chiswick and ESB – not all did.

10 years ago of course the selection was broader – the staples having been joined by the regular quarterly seasonals.

For the last 4 years since the Fuller’s take over the Gale’s brewery in Hampshire I’ve also got pleasantly used to drinking Gale’s beers in London as well. In fact most times I’d opt for an HSB in preference to a London Pride or ESB. Perhaps that’s a reflection on the care that Fuller’s have taken to match the taste of that fine dark beer now it’s brewed in Chiswick, and to deliver it consistently.

But recently things have changed. On my last few visits to London Fuller’s pubs I’ve only found one (the Counting House at Bank) that still carries HSB. The Shooting Star in Middlesex Street and the Hung Drawn and Quartered at Tower Hill no longer seem to carry it when they did before. The Shooting Star used to carry Butser as well for a while.

HSB and other Gale’s beers are available of course at ex-Gale’s pubs – eg the excellent Basketmakers Arms in Brighton. But much as I love drinking in Brighton it’s a long way to go for a lunchtime pint. (Brighton is certainly worth a trip for an evening – see my next post).

Are Fuller’s gradually phasing out the distinctive Gale’s beers? I do hope not.

Is anyone aware of other pubs that stock HSB regularly?

One Response to “Are Gale’s Beers Disappearing from the Capital?”