An Evening in Winchester (Part 1)

Geoff and I had a good evening out in Winchester the other night. Here is my first report of the pubs visited.

I arrived in the city before him so this post covers those that I did on my own before meeting him from the station. This enabled me to visit practically all the pubs on my shortlist – see my previous post on planning the Winchester evening.

My first port of call was an unexpected extra.

The Albion is the closest pub to Winchester station since the South Western was shut many years ago. It’s situated at the town end of Stockbridge Road by the busy junction there. I’d visited the pub once before earlier in the year and although the pub was itself a small and friendly establishment, the beer quality wasn’t the best. However as I walked past I noticed the Daleside ‘England’s Pride’ pump-clip – a beer I enjoyed greatly the week before in London. So I decided to go in. 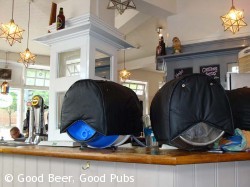 Casks on the bar at the Albion, Winchester

The first thing I noticed was that the beer selection had increased since the time before. The Albion was now offering 6 draught real ales – 3 handpumps and 3 casks sitting on the bar.

Apart from me, I noticed one other couple drinking real ale – everyone else seemed to be on lager. The ‘England’s Pride’ was OK but not as nice as I’d had before – a very slight vinegary feel to it. It’s always good to see pubs with a great selection of beers, but does this pub sell enough real ale to justify having 6 on? I’m not sure.

So on to the next.

My next was going to be the Hyde Tavern but on the way I decided to pay another visit to the King Alfred. 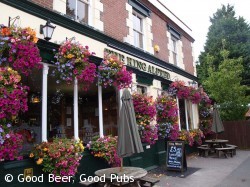 The King Alfred (11 Saxon Road) used to be a favourite when I lived in Winchester 20 years ago. At that time it was a Marstons pub (as were most of the pubs in Winchester) and the Pedigree was always superb. Lots of games were available in the pub for the punters too.

After Marstons sold their southern pubs to Greene King in 1999 the beer selection in the King Alfred became GK IPA and Abbot – neither of which I like much. So I stopped visiting the Alred on my occasional trips back to Winchester.

The King Alfred is still a GK pub and I could see through the open door that the beer selection was still the same. There was a third pumpclip turned round and I read on Beer in the Evening that they do carry a guest beer. But in the absence of anything else I decided not to stay for a pint – maybe another time.

So back up the road to the Hyde Tavern. 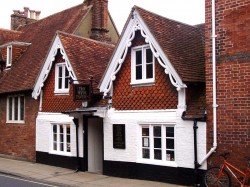 The Hyde Tavern is a wonderful little two-room pub tucked away north of the city centre at 57 Hyde Street. It was my original choice for first pub on this crawl and was another old favourite that I’d written off after Greene King acquired it. When I found out that GK had sold it (about three years ago I believe) I started coming again. It’s now a free house with a good selection of beers.

The pub was almost empty, but it was still only 6pm. There were 5 beers on – Ballard’s Midhurst Mild, Cheriton Pots Ale, Ringwood Best, Hogs Back Summer Ale and Harvey’s Sussex Best. A real cider was also available but I can’t remember what. I had the Ballard’s Mild and Pots Ale and they were both delicious. The mild had an amazingly powerful flavour given its strength (3.4%). 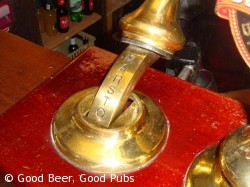 Marstons stamped into the hand pumps at the Hyde Tavern , Winchester

Interestingly, the handpumps here still have Marstons stamped (moulded?) on the handles which becomes visible when the pints are pulled. This is a hangover from when the Hyde Tavern was also a Marstons pub. The old Marstons brewery was nearby at the southern end of the road – on the corner with North Walls. The brewery later became a Marstons distribution depot and was demolished some years ago for housing.

My last two visits to the Hyde Tavern were in wintry evening darkness so I hadn’t appreciated that there is also a garden on a lower level at the back of the pub. If the sun had been shining I might have strayed into it.

So after some good conversation with a photographer and his missus I headed back up to the station to meet my friend Geoff.

(Added later) Read about the ones we got to:

And the ones we didn’t get to:

This Google map shows my favourite pubs in Winchester.