I was out in Clerkenwell/Angel/Old Street the other night with a friend and we popped into the Wenlock Arms off City Road for a while. I got very excited when I noticed they had Brain’s Dark on draught. 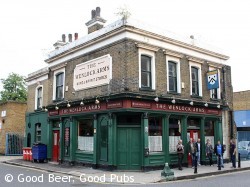 Brain’s Dark was my beer of choice when at university in Cardiff many years ago. It’s a beautifully smooth pint – a bit like Guinness but nowhere near as bitter. And it’s so rare to get it in London that I just had to have one.

But, things don’t always go as well as you think and although the pint tasted a bit like Brain’s Dark it had none of that creaminess I was expecting. After a short time I realised what had happened when my beer became an old-style London pint with practically no head – something that would of course never happen in a Brain’s pub in Cardiff. There was no tight sparkler on the pump – none of the pumps in the Wenlock have them.

I am grateful that the barstaff eventually found a tight sparkler from somewhere and I was able to enjoy a glass of Dark how it should be. It’s frustrating for the staff though if they’re not used to it – one of the other barstaff at the Wenlock who wasn’t involved in the discussions just took the sparkler straight off later. In Brain’s pubs in Cardiff you’ll see pints lined up waiting for a top up – it should be poured in stages like a Guinness.

I’ll be posting about the other pubs we visited that night soon.

One Response to “Brain’s Dark Sighted in London”