Jon and I had a pub crawl in Lewes one evening recently. The first post covered arrival in Lewes and the brewery. This second part covers the first few pubs we visited – the Dorset Arms, the Gardeners Arms and the John Harvey Tavern. A third page covers the Lewes Arms and the Brewers Arms 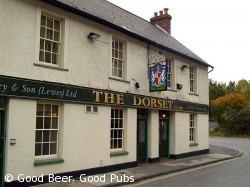 The Dorset Arms is a large Harvey’s pub in the cliffe area of Lewes. The pub interior has a victorian feel at the front with a good cast iron fireplace and coloured glass in the dividers. The back of the pub is a bit more modern and bright.

It was a bit hard to judge the atmosphere in the Dorset Arms since for most of my visit I was the only person there apart from the barstaff (Jon was still on his way down). But to be fair to the pub it was 4:20 on a grey Tuesday afternoon. 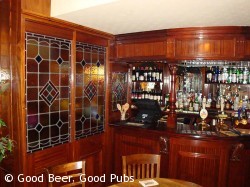 The beers are all from the Harvey’s brewery just up the road. Again it may be down to the lack of customers but the Sussex Best tasted a bit tired. The peanuts however were very reasonably priced – a large portion served for 55 pence in a bowl. They also weren’t too salty either which was good.

Food is also available but I didn’t have any.

Overall, a slightly disappointing start to the pub crawl. So on to the next one. 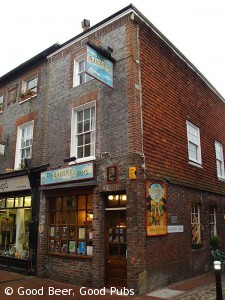 Back up Cliffe High Street towards the brewery I popped into the Gardeners Arms.

This is a narrow, cosy free house diagonallly opposite the Harvey’s brewery shop. The atmosphere was pretty lively and welcoming despite the time 4:40 ish on a grey Tuesday afternoon. You get the impression that most customers are locals, but it’s not cliquey.

Six beers are available on my visit: Harvey’s Best, Adur Black William, Bartrams Suffolk Trinity, Hopdaemon Green Daemon, Red Squirrel Conservation and Harvey’s Old Ale. I had the Red Squirrel beer which was quite dark in appearance but much more hoppy than malty in taste. Much more to my taste than the Green Daemon which I tried a small sample of.

I didn’t have time to try more than one before I was off to meet Jon at the next pub – the John Harvey Tavern. 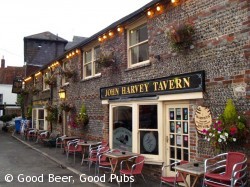 Set slightly back from the south side of Cliffe High Street right by the river, the John Harvey Tavern is the brewery tap for the Harvey’s brewery opposite. Jon arrived shortly after I did at about 5pm.

The interior is traditional dark wood with wooden pillars and beams. Some of the seating areas are done up to look like you’re sitting in a huge barrel – a nice 70s touch I felt. There is a buzz about the place even though it’s a large pub and the real fire at one end of the main bar is welcome. 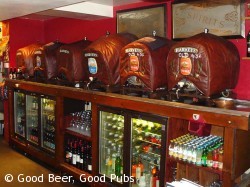 Barrels behind the bar at the John Harvey Tavern, Lewes

The beers are superb – Harvey’s Sussex Best is available on gravity along with a couple of others. Initially the Best seems to hit the spot but after a while you wonder whether it would be better served through a handpump – it’s a little flat. But you can’t knock the flavour though.

Food is available but we didn’t eat here.

Time for a couple before heading off.

The last part of our trip to Lewes is covered in the 3rd part of this series.